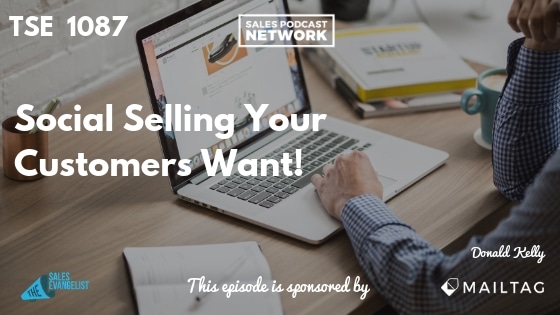 Sellers who interact with and provide value to prospects using social media must understand the characteristics that turn this into the kind of social selling your customers want.

We’re tackling this topic all month, and even if you aren’t a big social media person, we’re providing an actionable plan to help you get in front of your prospects.

It isn’t enough to “set it and forget it” or generate large amounts of content in hopes that people will click through to find you. It’s thoughtful preparation that gives buyers what they want and need right now.

I discovered the idea of using social media to sell when I was in college. I was seeking an internship with people who were in Chicago and our college professor told us that we needed a LinkedIn profile. He told us that we had to maintain that profile because that’s where business professionals interacted.

I thought it was a great idea because I was suddenly connected to millions of other professionals. I also thought it was great that I could pitch to all of those people.

My professor knew a woman in Chicago so he introduced us with the intention that I would seek insights from her. In my mind, though, she was going to provide me with an internship or connect me with someone who had one.

Instead of approaching it as an information-gathering phase, I was trying to close the deal. I think many of us make that mistake with social media.

Sellers are often like kids in a candy store because social media gives them instant access to millions of potential customers. Why in the heck wouldn’t we go ahead and pitch them all? Let’s tell every single person what we’re doing.

And then social media turns into a pitch-fest.

Because we can copy and share messages with groups of people quickly, we have access to millions of new prospects at our fingertips. Very quickly, though, prospects recognize that every seller is engaging in the same kind of social selling.

Prospects are overwhelmed with the same messages from multiple sellers, so we have quickly realized that we can’t continue using the same methods.

In response, we settled on thoughtful interactions with people. We settled on the idea of liking everything they posted on social media and commenting on their content, sometimes arbitrarily.

We didn’t necessarily have a growth plan or a strategy. We just assumed that if we liked a bunch of their stuff now, when we eventually sent them a message, they would instantly want to work with us.

The idea might have worked well initially, but again, sellers adopted the same strategy across the board and failed to stand out from one another.

Our strategy was to be top-of-mind because of our content. We engaged with different platforms and pumped content everywhere, which ultimately became a bunch of junk floating around on the Internet. Again, every competitor was doing the same.

The platforms realized that the content was taking their users away to other sites and they took steps to prevent people from being diverted away.

Social media platforms don’t want you to send their users to other sites. As a result, you must adjust your social selling efforts so that you’re linking to content on that same platform.

LinkedIn wants its users to see the ads that its customers are paying to promote. If its users leave LinkedIn, they won’t see the ads. The algorithm will penalize you for sharing content outside of LinkedIn.

Sellers responded with LinkedIn articles, long-form posts, and videos. We moved to original content in our next iteration of social selling, and within the next year, we’ll likely move to something different.

Despite all this change, there is one takeaway. Be a person. Be human and care about other people.

The definition we shared from Hubspot is this: Social selling is when salespeople use social media to interact directly with their prospects. Salespeople will provide value by answering the prospect’s questions and offering thoughtful content until the prospect is ready to buy.

Do things in moderation. Use direct messages. Set a goal to connect with five new prospects each day on LinkedIn. Try something like this:

It’s always great to learn from sales leaders in the industry. Permission to connect?

An article on PostFunnel reported that marketers who align their content with specific points in the buyer’s journey yielded 73 percent higher conversion rates. Think about that. If you’re able to produce content based on where your buyers are in that particular phase, it will be relevant to them.

Your buyers want posts that showcase your new products or services and they want to learn something along the way. Use social selling your customers want in order to help them throughout their journey.

Speak to the three stages of the buyer’s journey:

Sprout Social suggests weaving awareness- and consideration-stage content together. Those two stages are usually where people rely on social media.

With social selling, open the door with entertainment and inspiration. Use memes or videos to grab attention. Then carry them the rest of the way with educational content. #SocialSelling

This is one of the most effective ways to prospect. When you combine this with your other techniques like cold calling or emails or regular mail, you’ll see great success.

Apply this today. Identify five people to connect with in your industry. If you do that every day for a week, you’ll have 25 new connections by the end of the week.

Strive to create the social selling your customers want to increase your effectiveness and improve your outcomes.