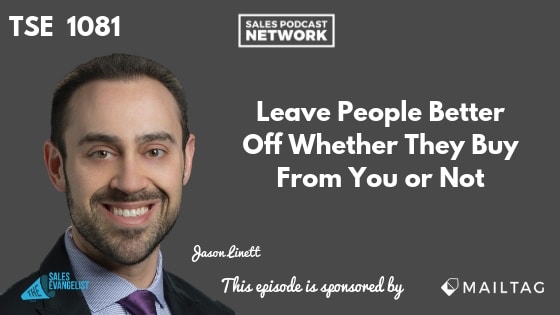 TSE 1081: Leave People Better Off Whether They Buy From You or Not 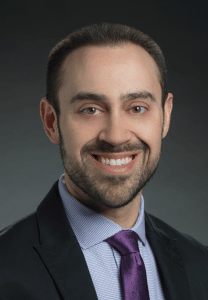 When you interact with your prospects, your goal should be to provide such great value that you leave people better off whether they buy from you or not.

We’ve been talking about value all month, and today hypnotist Jason Linett talks about how people can change their thinking to grow their business. Growth isn’t just about your platform but it’s largely about how you tell the story to your audience.

We often miss the power of a story and its impact on our potential customers.

In almost every category, there are others out there who do the same work you do. Storytelling is the one thing that truly sets you apart from the competition so that you’re no longer just a commodity. Your customers can go find another business coach or web designer, and even another hypnotist.

Jason points out that he didn’t get married by approaching a pretty girl at school and announcing that they were going to have children together. Instead, they built a relationship through the natural progression that occurs when people get to know each other.

Look at the relationship building aspect of it. You know that you want to help people, so look for something that will help the customer. Find things you can set in motion that will help your prospects win.

Suddenly, there’s a collection of people out there who didn’t need your entire service but they are in the raving fan category. Some of those that you helped will move forward in the funnel in order to see how you can help them even more.

Most people don’t seize this concept because they fear giving away too much. They believe that if they give away too much, people won’t buy from them.

Think of it as a difference of show versus tell. I can tell you what methods may be helpful and you can research them and dig into them in order to determine whether they might truly work, or I can get together with you and actually help you do it.

Be willing to give away your best content to your customers sometimes. Give away an abridged version that helps them along on the journey and prompts them to consider what more you might have to offer. #BuildValue

Many people want to try an at-home version before they commit to the live “being in the room” version.

How do we get people to care before we ever really ask them to listen?

We need to think differently. It’s about listening to the audience and responding to their requests.

Jason calls hit pitch “The Hollywood Effect.” It’s based on the tendency of movies to launch you directly into some piece of the action, get you swept up into it, and then rewind to tell you the back-story.

He launches into a story about murder, and about a new mother who moved into a hotel after seeing a bug in her home. By the end of her first meeting with him, she killed a housefly with her bare hand.

Draw in the entire room. Get them to put down their food and listen to what you have to say.

As you decide how to move forward, pick the option you are most comfortable with. That’s your first entry point and you should flesh that out completely and make it exactly what you want it to be.

Once that piece has become a machine that’s running itself, you can branch off to some other thing.

Jason suggests that there’s no such thing as “finding the time.” It’s a game we invented to trick ourselves into not doing things we’re absolutely capable of. Instead, we should use the mechanism of making time.

Consider putting everything on a scheduling platform. Make use of color-coding. Choose one color for the events that cannot be changed.

The number one tip is to listen. So often we catch ourselves trying to mind-read our audience instead of starting with the ask and discovering the customer’s greatest need.

You can connect with Jason at jasonlinett.com or on social media as Jason Linett.

You can also grab a copy of his book, Work Smart Business: Lessons Learned From Hypnotizing 250,000 People and Building a Million-Dollar Brand. Head to worksmartbusiness.com for a freebie called the Positive Influence Power Pack that will teach you specific strategies to influence yourself and others.

You’ve heard us talk about the TSE Certified Sales Training Program, and we’re offering the first module free as a gift to you. Preview it. Check it out. If it makes sense for you to join, you can be part of our upcoming semester in April.