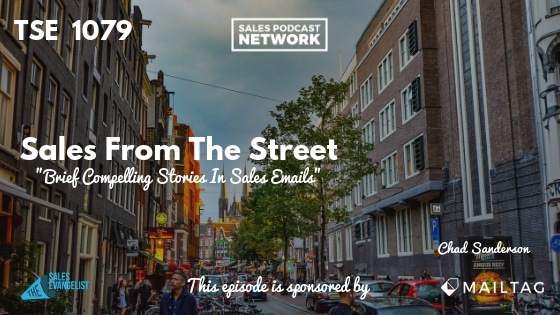 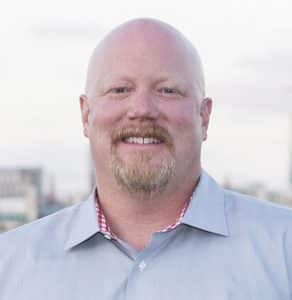 Many sellers understand the challenge of using emails to reach out to prospects, but Chad Sanderson tells us that using brief, compelling stories in sales emails can leave a memorable impression on a prospect who is inundated with noise.

Chad has worked as a marketer, seller, sales leader, and entrepreneur, so he understands the perspective of everyone listening to this podcast.

Chad points out that most emails suck. We’re all connected to our devices and we’re constantly inundated with impressions through Facebook messages, videos, emails, LinkedIn requests, and even WhatsApp or Snapchat messages.

That doesn’t even include impressions you get while watching television.

The only way to effectively break through the noise is to put yourself in the other person’s shoes. Everything is moving at a ridiculously fast pace, so if you never slow down enough to truly consider the other person, you’ll probably fail to truly connect.

You must connect with people in a way that’s valuable from their perspective.

People still buy from people, so if they don’t know and trust you, you must build rapport before you earn the right to talk about yourself. #BuildRapport

As if the crowded inboxes aren’t enough, it’s also true that many of the emails people send are just drudgery. Chad points to one company that has been pursuing him for several months, and as he mapped the cadence of the messages, he noted that the messages never included anything from his perspective until about email 14. The messages were always about the company.

He said it happens all the time because sellers don’t realize that approach doesn’t work.

And though he tries to be kind because he works in this world too, he sometimes has to unsubscribe because the messages aren’t valuable.

To make the idea simpler to understand, think about this in the context of your friends. Everybody has at least one friend that will not stop talking about themselves.

Even in a social setting, people will eventually move away from that person. It’s true in sales, too.

We seem to assume that the rules are different in sales. We forget that we’re in the people business and that relationships matter in sales just as they do outside of work.

Slow down and take a deep breath. Think about your general target audience. Instead of thinking about Donald or Chad, think about reaching out to podcast hosts who focus on B2B revenue generation.

Then you’ll have a little bit of context. You still won’t know those people, but you’ll have a good place to start. But you have to be able to reach out to prospects at scale.

Chad read a report last week about a company that ran a test of 7,000 emails, personalizing half of the emails to the challenges the person would face based upon their role. Think industry/company personalization rather than individual personalization.

They found that the open rates were four to five points higher on cold emails that were crafted to highlight challenges the receiver was facing.

Some people argue that isn’t personalization, but what we really need to do is understand the conext these people are working in and then show them something that will tap into their curiosity circuit.

The next level of personalization involves those who responded to the first round of communication.Instead of researching 100 people I only have to research the 10 who indicated interest in my product or service.

Make them curious so that they’ll be waiting for the next email.

Chad related the story of a friend who went into a Men’s Warehouse to get a tux. Then he used the experience to reach out to the CEO of the company to highlight how his company could help fill in some of the organization’s gaps.

Using his own individual experience, he crafted an email that was still only six or seven sentences long so that it fit on a mobile screen.

Tell him about the person who is like him.

Although you don’t know him yet, you know someone who is like him, so tell him that story.

If you want to understand story structure better, grab a copy of Creativity, Inc, a book about how Pixar creates stories for its movies.

Very few people can write an email the very first time that communicates well and fits neatly on one mobile screen. You’ll likely need multiple drafts to get it right.

Communicate to your audience that you’re paying attention to them and what they are dealing with. Acknowledge awards they won and acknowledge articles you’ve read about that address a problem they might be having.

Consider Barb Giamanco, who reached out to female chief marketing officers to recruit help with a project. She emailed each of them by acknowledging an award each had received.  Then she asked for their perspective on a project she was working on.

The emails indicated that she was paying attention to the CMOs’ careers. It acknowledged a problem that the CMOs might be having and a desire to address it. It wasn’t until the very end of the email that she even mentioned her own intentions.

Be authentic and genuine.

Realize, too, that once you get an email dialogue started, you have to have the skill set to keep it going.

Check out Chad’s podcast B2B Revenue Executive Experience and you can find him on LinkedIn, but you must send a note with your connection request.

You’ve heard us talk about the TSE Certified Sales Training Program, and we’re offering the first module free as a gift to you. Preview it. Check it out. If it makes sense for you to join, you can be part of our upcoming semester in April.