TSE 1046: You Need to Worry More About Your Champion Than Your Decision Maker 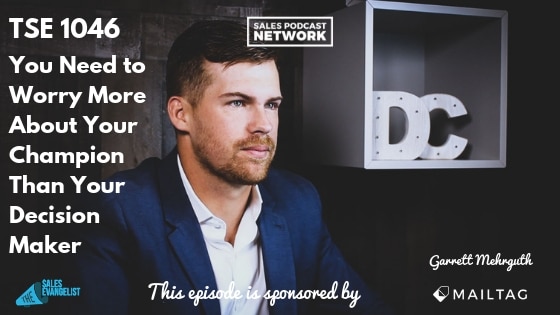 TSE 1046: You Need to Worry More About Your Champion Than Your Decision Maker

Sometimes sales professionals get it backward, and they fail to understand the need to worry more about your champion than your decision maker.

Today Garrett Mehrguth talks to us about the importance of your champion in your sales deals, and why we shouldn’t lose sight of his importance.

Sometimes there’s great value in changing the defaults we learn as salespeople. We tend to become so obsessed with the decision makers that we overlook the champions, who are arguably the most important person in the whole scenario.

How decisions are made

Salespeople sometimes focus so greatly on getting a close that we neglect the fundamental truths involved in selling. In fact, we alienate people and we become our own worst enemy.

It isn’t price; it’s me. Most often, we are the reason that deals don’t close. It’s a direct result of who we speak to, who we don’t speak to, the way we end a conversation, the way we treat people, how well we prepare.

We must have transparency and honesty to admit that often we’re the reason we don’t close a deal.

Salespeople are quick to take credit for successes and slow to take responsibility for failures. #SalesTruth

Garrett believes that if we would build our resources and our marketing toward decision makers, we would drastically improve our conversion rates.

Once a decision-maker recognizes he has a need, he might send a subordinate to a conference to talk to vendors. He might instruct the person to get three quotes and then bring his two favorites to the decision-maker. Once that’s done, the two will make a decision together.

He might suggest filling out 10 forms on the way to finding three good options. The pair will whittle those to two good options before making a decision.

Why you need the champion

The champion is your greatest asset while you’re not in the room, so if you alienate that person, you’re losing an important ally. You alienate the person who could potentially go to bat for you once you hang up the phone.

Good decision-makers make decisions by asking the champion whether or not he could work with that agency. So who truly puts their butt on the line?

It isn’t the decision-maker, because he has a fall guy.

The champion is the one who needs the information, the emotional support, and the resources to make a good decision. If you honor the champion with amazing intro calls, lots of sales resources, and well-prepared meetings, you give him the ammo to pitch you internally.

Why the decision-maker shouldn’t be your focus

In five years of working with marketing teams, Garrett has never heard anyone mention targeting the champion. Instead, we treat decision-makers as though they have some kind of supernatural power.

Deal retention is far more important than closing deals. Even if you manage to close a deal, if you don’t treat the champion well, you won’t renew it. You won’t get referrals from it.

In Garrett’s mind, there isn’t a single aspect of the process where the decision-maker is more important than the champion.

He acknowledges, too, that absolutes are dangerous. It’s certainly not true that the decision-maker should never, ever be considered.

Instead, let’s work to change the fundamental hypothesis that we as marketers and sales reps enter relationships with.

If we spend more time building rapport with the point of contact, you will drastically improve your close rate because you are building confidence and comfort with the most important voice in the room.

You need a champion who will give you a voice during moments when you aren’t in the room because that’s often when deals are decided. You won’t close $150,000 contracts while you’re in the room. It happens behind closed doors, and you won’t likely be there when it does.

Give your champions resources to bolster their confidence. Make that your primary goal.

Your champion is likely scared to death of going to his boss with a recommendation. His discernment and character will be judged by the referral he makes. Anytime you give a referral to someone, your own judgment is on the line.

Challenge things that other people won’t do. Put your neck on the line by offering evidence and claims that protect the champion when he goes to his boss. You take the risk so your champion doesn’t have to.

It will give him the confidence to recommend your agency and it will differentiate you from the competition.

In order to be successful, do the opposite of what everyone else is doing.

Garrett’s company operates on annual contracts, and they give the point of contact room to act if he doesn’t feel completely comfortable in the relationship. By backing up their claims, it gives the champion room to cover himself if he makes a bad choice in hiring them.

The champion has to have a day-to-day relationship with you. You can’t neglect that relationship.

It’s why you must develop resources that speak directly to your champion.

Even when it’s time to renew, the champion will get to decide whether to continue working with your agency. Regardless of the data, if the relationship isn’t there, the deal won’t renew.

Change your perspective to focus on champions, and your volume will drastically improve. There are far more champions looking for vendors than there are decision-makers.

Change your prospecting and marketing to focus on the champions, you’ll increase your at-bats and your close rate.

You can connect with Garrett on LinkedIn @garrettmehrguth, email him at gmehrguth@directiveconsulting.com, or connect with him on Twitter @gmehrguth.