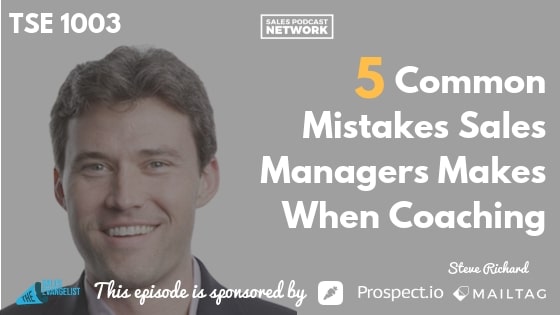 In our work with sales reps, sales teams, and sales managers, we encounter many people who believe that sales coaching doesn’t work, but many of them fail to realize that there are 5 common mistakes sales managers make when coaching.

Steve Richard, founder of ExecVision, shares how to avoid those mistakes, and he suggests you start by recognizing that there’s a difference between coaching and training.

Training is teaching someone to do something new that the person doesn’t know how to do. Coaching is helping someone do something that they do know to the point of mastery.

If we expect a rep to embrace a certain behavior, we have to train him. If we don’t, that failure is on us. Then, after we’ve trained him, we have to overcome the “forgetting curve” which is a function of our brain’s tendency to purge information.

Coaching is the act of training iteratively, focusing on the person, and repeating that behavior until it becomes second nature, like tying a shoe.

Consider whether your organization is struggling with any of these mistakes.

Also, build a team of people who will identify these steps. Include managers, senior executives, and representatives from operations, enablement, and sales. A varied team can ensure that these decisions aren’t being made by people who haven’t made calls in a while.

Check out the book Cracking the Sales Management Code: The Secrets to Measuring and Managing Sales Performance for clarification about metrics. Learn the difference between activity metrics that you can control — things like making phone calls and sending LinkedIn connection requests — and objectives like having conversations with people which you have less control over.

Aside from simply giving your team members goals, give them a roadmap to achieve them. [08:32] How many activities should they achieve in a week to achieve their goals?

2. Neglecting to train because of time.

Most every sales leader intends to coach his team. [10:26]

Managers typically know they have to be more consistent as a team, and they know that the way to do that is through coaching. But they also universally say that time is the thing that prohibits them from doing it.

They have the greatest of intentions, but something always gets in the way.

3. Misunderstanding how to train correctly.

It’s shocking to think of the amount of money that is spent on sales rep training. Sales managers, however, typically receive very little training. Many of them have never been taught to coach the right way.

Think, for example, of a sales manager who observes a call and then immediately launches into constructive feedback. Basically, he tells you all the things you did wrong.

When the sales rep hears it, his system sends a hit of the stress hormone cortisol, which triggers the “fight or flight” response.

The sales rep either defends himself by digging in his heels or he puts up a wall and stops listening. In either case, it’s not good.

People don’t change their behavior when cortisol is present. They change when dopamine is present. Sales managers must coach in a way that motivates sellers to learn and change. #SalesTraining

Instead, try the model that Jim Kennan recommends: observe, describe, prescribe. Leave the judgment on the shelf.

Listen to the call. Recount what the rep did during the call. Then ask a question that prompts the seller to figure out what he could have done differently to improve the call.

People value more what they can conclude for themselves than what they’re told.

If sales reps can’t listen to recordings of their calls, they’ll have no way to improve their performance. [18:45] They will only have vague ideas of what they think they did during the call.

During the 80s, the Japanese beat us in the auto industry because they were continually improving their operational efficiency.

Adopt the continuous improvement mindset that served the Japanese so well.

Your organization’s training must be habitual. It must be part of the rhythm of the company.

Make your training such a part of the process that it becomes the gospel.

It can be as simple as listening to 5 minutes of a call with a rep and asking for reflections. It will do good things for your company.

Instead of feeling like sales managers have to do all the work, involve the sales reps in their own development. Run call-of-the-month competitions where reps submit their best call every month with written commentary.

Give people an environment in which it’s fun to learn and improve.

Check out ExecVision’s Call Camp that breaks down real sales calls like game tape to evaluate what works and what doesn’t. It’s a free webinar that shares practical advice with sales reps, managers, and leaders to improve their effectiveness.

They are offering a 14-day free trial, and half off your subscription when you use the code Donald at checkout.