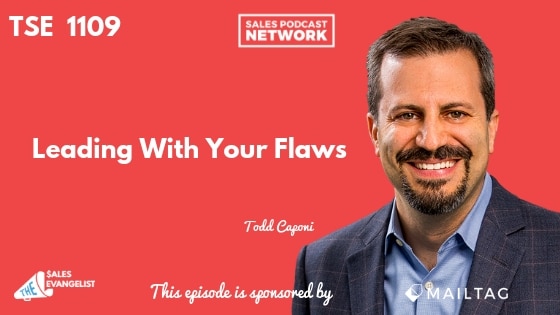 It seems counterintuitive in sales, but leading with your flaws can shorten the sales cycle and disarm your customers, ultimately leading you to better metrics.

Todd Caponi was the chief revenue officer for a company called Power Reviews which helps retailers and brands collect and display ratings and reviews on their website. His time there caused him to rethink the way he leads sales organizations because he discovered that consumers were more likely to buy a product that had a 4.2 to 4.5 rating than a 5-star rating.

Statistics show that 95 percent of consumers in the B2C world are looking at reviews before they buy. Of those, 82 percent are looking for negative reviews before buying. Todd wondered what might happen if the same notion could be applied to the B2B world.

Todd embraced the idea of embracing the pros and cons and leading with them. He discovered that his first deal, which previously had a sales cycle of 6 months, closed within 4 weeks.

They discovered that when you lead with your flaws, your sales cycle speeds up dramatically. You’ll qualify deals faster and eliminate those deals that you probably weren’t going to win anyway.

Todd was in New York when his VP of sales called him to say the company had an inbound lead from an apparel brand that wanted to initiate an evaluation. The brand happened to be headquartered in NY, so Todd scheduled coffee with the senior vice president of e-commerce. The coffee meeting became a presentation instead, and the SVP got right to the point.

He said that his company had been talking to Todd’s competitor, and he wanted to know why Todd’s company was better than the competitor. Todd figured he had nothing to lose, so he asked an unexpected question.

“Do you mind if I tell you why the competitor is better?”

He explained that the competitor had offerings that his own company didn’t, so if he wasn’t going to be able to meet their needs, he wanted to determine that quickly so both parties could move on. The room deflated. The guy clearly thought Todd was crazy, but he agreed to the idea.

Todd talked about an add-on that the other company had but explained that his own company was focused on certain core beliefs. The SVP acknowledged that the add-on the competitor was offering wasn’t a necessity for his company, so they moved on.

Within 20 minutes, the SVP kicked everyone else out of the meeting and grabbed a folder that includes the company’s budget for ratings and review software. He pointed to a number inside and asked Todd if he could hit that figure.

The two engaged in a collaborative process that culminated in a deal a few weeks later. The company didn’t initiate an evaluation. It simply chose Todd’s company. He recounted that he had called Todd’s competitor, who quickly went on a rant about the add-on that distinguished the two companies.

Every time they led with their flaws, it completely disarmed their prospects. The company built its sales cycle on a foundation of trust and all of its metrics moved in a dramatically positive direction.

Todd said that we’re all wired to resist being sold to. As a buyer, he simply wants to be able to predict what his experience with a certain product will be like, and then to get the best deal he can. He said that a salesperson will demonstrate within the first five minutes whether he will be a great resource or push toward a sale even if it isn’t what the buyer wants.

Truthfully, the era of hiding your flaws from your prospects is over. The proliferation of ratings and reviews has moved into the B2B area and it has become the way of the world.

Every year, reviews are climbing and independent studies are going down. Marketing is becoming less trustworthy and reviews are becoming the core that brings buyers to the table. Sellers must embrace that.

It’s counter-intuitive to most people to show weakness. Many sellers will listen to this and wonder why this works. Todd dug into the neuroscience of this and discovered that buyers make decisions using feeling and then back them up with logic. Logic is the justifying mechanism to emotional decisions.

We are also wired to disbelieve anything that looks perfect. We are taught to seek the negative. A recent study reported that buyers in a typical purchase cycle spend 39 percent of their time talking to sellers and 61 percent of their time doing other homework. This includes research, reviews, and back-channel information.

In his book, Transparency Sale, Todd tells the story of a rep who was selling something to an oil company. He explained the concept of levers, which he has become famous for.

If you search Google for tips on negotiating, you’ll find countless pointers that destroy trust. It’s like a Texas Hold ‘Em tournament.

But if you want to build trust through the goal line, you lead with what is important to you as an organization. You create buyers who are actually able to negotiate their own deals.

In the case of the oil company, Todd was pulled into a last-minute negotiation with a group of procurement people. Before they even started, he asked for permission to write four things on the board. He listed four levers on the whiteboard.

The people in the meeting immediately asked for 30 percent off. Instead of offering to do 15 percent and initiating that song and dance, he acknowledged that it might be doable and then suggested using the four concepts on the board. These concepts represent four things Todd’s company was willing to pay for in the form of a discount.

The notion immediately disarmed the people in the meeting.

“Commit to more technology and because that’s valuable to us, we’ll pay you in the form of a discount.”

“Since we have a three-year commitment, pay us for years two and three and we’ll pay you in the form of a discount.”

“Extend your deal to five years and we’ll discount an extra 5 percent for years four and five.”

Todd’s company got something in return for every dollar they gave away, and the oil company loved Todd’s company at the end. Remember that you aren’t negotiating hostages. You’re negotiating agreements with products.

Commit to being as transparent as possible. Every person simply wants to feel that they’ve been heard and that they’ve gotten a good deal.

Get rid of one-sidedness. You’ll bring humanity back to the conversation. You’ll have the confidence of interacting with people as human beings. So few companies have a framework for the way they negotiate.

You could implement this concept right now. It doesn’t require a three-day class.

Transparency sells better than perfection. With the proliferation of feedback and reviews, transparency is a requirement. #SellerTransparency
Click To Tweet

“Leading With Your Flaws” episode resources

You can connect with Todd on LinkedIn or at his website, transparencysale.com. Grab a copy of his book, Transparency Sale. If you haven’t connected with me on LinkedIn already, do that at Donald C. Kelly and watch the things I’m sharing there.

You can take it on your own or as part of the semester group. 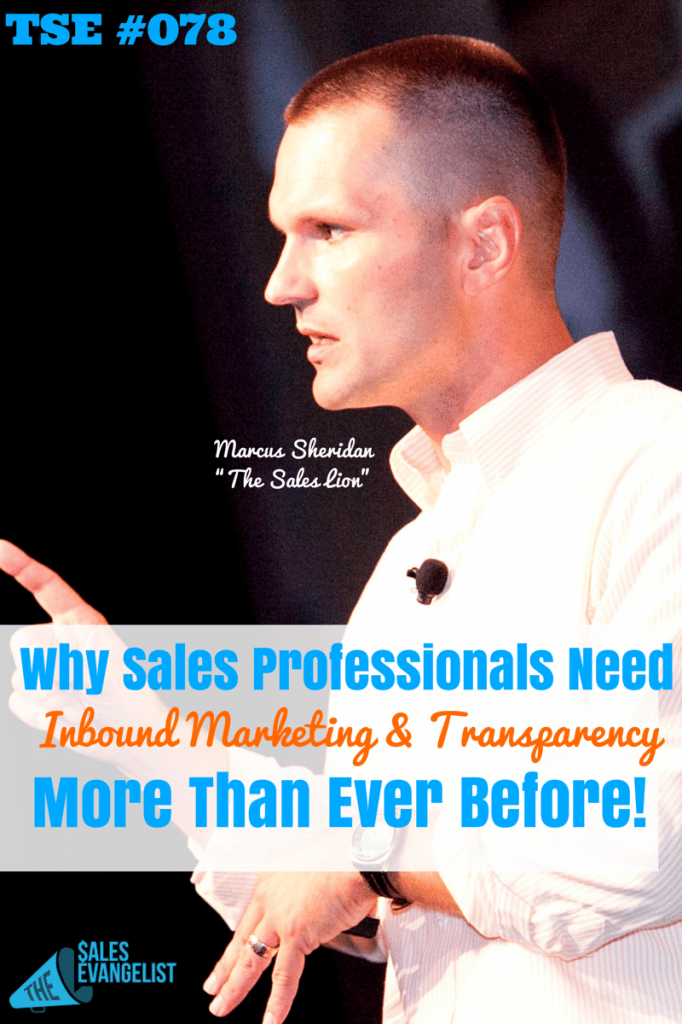 TSE 078: Why Sales Professionals Need Inbound Marketing and Transparency More Than Ever Before!

In this episode, I interview Marcus Sheridan, aka “The Sales Lion”. Marcus helps businesses embrace the power of content and inbound marketing through his personal experiences. Him and his team offer content marketing consulting & workshops, HubSpot consulting, speaking opportunities and blogging services. He is passionate about selling and the power that comes to an organization and sales professional when they learn to incorporate inbound marketing and transparency concepts.

Here are the details of our conversation: