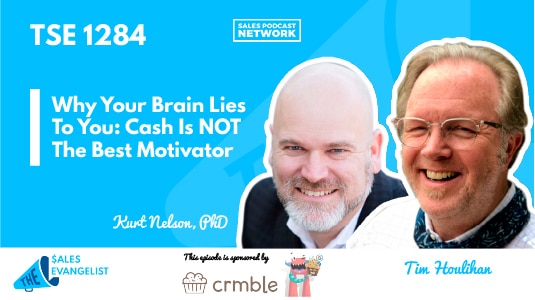 TSE 1284: Why Your Brain Lies To You: Cash Is NOT The Best Motivator

Although money is one of the indicators of growth and success, it’s not necessarily the best motivator when it comes to incentivizing a sales team.

Tim Houlihan and Dr. Kurt Nelson are consultants who have spent more than 20 years working with companies to design incentives that will increase productivity within sales teams. Just a few years ago, they started a podcast that provides practical applications in the real world. One of their topics, motivation through incentivizing, is especially helpful for sales managers.

People tend to make decisions based on an emotional gut response, even though we mistakenly think these choices are made based on rational thought. Emotion and motivation come from the same root making it difficult to distinguish one from the other. Money has less of an emotional connection than we realize and because motivation is tied to our emotions, money can be a poor incentive for a sales team.

Daniel Kahneman won a Nobel Prize in 2002 for his idea about the one thinking vs two thinking, an automatic response versus one’s cognitive reflective thinking. Human beings respond quickly to a number of situations because that’s how we survive.

The brain takes only 3% of our body weight but it consumes 20% of the energy used. The brain then tries to conserve energy with the speed of decision making. When we make emotion-based decisions, non-rational judgment are made.

The illusion of motivation

Because we think we know our own motivation, we think we can analyze what motivates others. While we can be sympathetic, knowing what others think has too many variables for us to make a consistent, accurate assessment. If we focus on someone’s emotions, instead of assuming what they’re thinking, it is far more effective to ask directly.

Cash is a required component

Cash isn’t bad as an inventive. It’s a required component in any business and it’s needed to pay the bills, mortgage, buy food, go on vacation etc. However, once those needs are met, incentives that are more material or experiential in nature move people into greater effort.

Tim did research with Dan Ariely from Duke University, the author of the book called Predictably Irrational. For their study, Tim and Dan took several call center reps and broke them into four groups, each getting a different reward. They found that the people who were rewarded with prizes such as bicycles, crock pots, and other non-cash items performed 30% higher than their counterparts who received cash.

When we evaluate the value of an incentive, a cash reward is easily calculated against the effort it takes to get it. When a non-cash reward is offered, it’s harder to estimate. The thought process then goes to the level of desire for the prize and the motivation becomes emotion-based rather than calculative.

The Four Drive Model, developed by Paul Lawrence and Nitin Nohria, illustrates the different ways people can be motivated.

Competition as a motivator

Tim would then say that whoever raised his/her hand the highest would get the candy bar in he was holding. Invariably, there would be people who stood on their chairs to get the candy bar. In this scenario, the motivation wasn’t the prize. It was the competition.

The same is true for the sales reps.

Tim and Kurt often hear sales reps say that their whole lives revolve around money. Was this true? Tim and Kurt decided to team up with a global automobile manufacturer in Saudi Arabia to test the dealer owners. These were extraordinarily wealthy men so cash was not a good incentive. Instead, they were offered lunch with Nelson Mandela who was still alive then and living in South Africa. They then added another element of competition and told them they would get to land their private jets at the Johannesburg Airport in the order that they finish the contest. The team set up a big tent on the tarmac and received them as they landed. Each owner in the competition worked extra hard to not be the last one to land.

They didn’t need more money but they sold more cars in order to achieve something that would elevate them above their peers, a prize they couldn’t get on their own.

The hedonic component speaks to a prize being perceived as a luxury. When we get cash, we tend to assign its function such as education, bills, mortgage, and other necessities. As a result, the mind has already spent the money.

However, if the prize is a $5,000 trip to Hawaii, you take it as it is. Our brain doesn’t spend that value the same way it does a cash reward. The trip to Hawaii will be an experience that you get to remember far into the future.

Money becomes a less motivational tool because a cash prize isn’t likely something you will share with friends or social media. A trip to Hawaii, a bicycle, and other non-monetary prizes come with a story you’re happy to share.

Cash incentives tend to be allocated to needs. Merchandise and trips have a luxury component. #SalesTruths

The pinnacle of happiness

There’s research that says $70,000 is what it takes for a person to be happy and above that, happiness flattens out. The reality is we don’t have a good understanding of what is going to make us happy. For salespeople, they believe they will be happier if they’re paid more. This isn’t necessarily false because money can increase performance and motivation. However, money doesn’t really make us happier. Sales managers have to be mindful of relativity. Relativity occurs when salespeople see other sales reps doing the same things they do but are paid more. This is a big demotivator as they begin to compare themselves to others.

Stack ranking is another misnomer in sales. A lot of sales managers say that peer pressure is good and believe people are motivated to greater action when compared to others.

This can backfire when middle-tier performers are asked to compete with the highest performers. The middle tiers may work hard but just not enough to be among the highest. This can be very discouraging.

It’s far better to allow the same levels of people to compete against each other so they all have the same equal opportunity to win.

Take it one step at a time

People want to be accepted so they remain content with the status quo. Sales managers, however, can veer the incentive system toward a non-monetary reward. When this is done, it’s important for sales managers to ensure they take into account perceived value. To illustrate, there’s an emotional difference between gaining $100 and losing $100. Even with the same amount, the idea of losing over gaining bears a much bigger emotional impact. The best way to make incremental change is by not taking away anything from the cash plan but do add a non-cash reward. You need to make changes from cash to non-cash in a very slow and incremental fashion. Give your sales reps the time to adjust to the new system until they’re ready for a non-cash reward. Do not take away their X just to give them Y when Y is much less than X’s perceived value.

The most powerful example of the non-cash reward that Keith has seen is a group travel reward. The award was by the sales district and winners all got to travel together with their spouses to places within 300-400 miles. It gave the winners a close-knit bond with each other, as well as their spouses.

Back in 2008, Tim was working with an insurance client that was declining at 35% annually. When Tim suggested the company use prizes that were non-monetary but equivalent to their commission, the business went flat instead of declining.

There are a variety of ways you can set up incentive systems and Tim and Kurt can help define what’s best for your company. They work with the sales team to understand the psychological factors that motivate the team to increase sales.

“Why Your Brain Lies To You: Cash Is NOT The Best Motivator” episode resources

There’s always an emotional aspect to every decision but we don’t always react rationally. We need to understand how our brain reacts to emotional responses. Connect with Kurt Nelson and Tim Houlihan on Twitter. They also do their own podcast that you can check out. If you are interested in more sales stories, you can talk to Donald directly. Reach him via these channels: LinkedIn, Instagram, Twitter, and Facebook about any sales concerns.

This episode is brought to you in part by Crmble, the easy-peasy CRM for Trello that helps you manage your contacts and leads without investing in complicated solutions, sync all your data, manage custom fields, and get powerful reporting on your sales. Try Crmble for free now at www.crmble.com/tse.

This episode is brought to you in part by TSE Certified Sales Training Program. It’s a course designed to help new and struggling sellers to master the fundamentals of sales and close more deals. It will help them elevate their sales game. Sign up now and get the first two modules for free! You can go and visit www.thesalesevangelist.com/closemoredeals also call us at (561) 570-5077.

We’d love for you to join us for our next episodes so tune in on Apple Podcast, Google Podcast, Stitcher, and Spotify. You can also leave comments, suggestions, and ratings to every episode you listen to.
You can also read more about sales or listen to audiobooks on Audible and explore this huge online library. Register now to get a free book and a 30-day free trial.