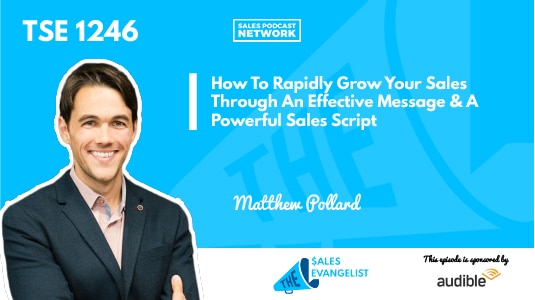 TSE 1246: How To Rapidly Grow Your Sales Through An Effective Message & A Powerful Sales Script

A message and a powerful sales script are important to rapidly grow your business. These strategies can take your sales game from zero to hero.

Matthew Pollard was a customer before he became a game-changer and a rapid growth expert. He was 21 when he met the most unbelievable salesperson he’d ever met. The man was part of the Wine Selector’s club. Matthew grew up in a relatively poor neighborhood so beer, straight vodka or bourbon had been his drink of choice. He wasn’t a wine person but the salesman’s script was so good he bought it.  Matt signed up for club membership and collected wine for 7-8 months before he moved houses. He started drinking wine and has become a huge fan.

When Matthew told this salesman he’d purchased the wine because of the sales pitch, he was told the secret was to tell the same story every time.  What made it so effective was that because he knew the script so well, he could guarantee a great performance consistently, and was developing better versions of his story each time.

That resonated with Matthew. The idea of a sales script was something new for him and he wanted to work on it.

What is script sales?

A sales script can initially sound robotic and monotone. It’s similar to an actor who is reading a script for the first time.  In that first run, there’s no guarantee that it’s going to sound great. Practice develops the performance and will give life to the scripted words.

Actors can embody their characters so well because they run their lines repeatedly. The same is true in sales. When you’re able to connect with your customer from a script, then you know you’ve practiced enough to make the script a natural part of your pitch.

Practice a sales script until it becomes who you are. Tell the jokes and stories repeatedly, watch what works and doesn’t work, and continue to hone the storytelling until you are getting positive reactions in the places you want your client to react. The story could be as simple as how you met your spouse to how you tried and failed to climb Mount Everest. You will get better about crafting your joke or story so it’s more engaging. It’s going to take time before you get comfortable but once it does, your sales script will be so effective.

Famous Australian comedian, Jim Owen, does stand up comedy and his shtick is to riff on topics people want him to talk about or he’ll find random objects in the room.  He finds humor in all of it. Jim admits that it’s a huge amount of work for a comedian to come across as original and authentic at the moment. He also adds that part of what he does is scripted and then he practices and rehearses the script until it makes people laugh. How he prepares is to make sure he thinks of all the variables in the room so he can be ready for any eventuality.

The key to sales scripting

As comedians practice to hone their craft, so should salespeople sharpen their scripts.

There are generally four or five problems when you’re selling a specific product or service. If you’re good at creating a unified message, finding a niche of clients to target, and you’re able to sell, then you have most of the problems solved.  The only thing that should vary is how you respond to the problems and questions that come up. Your answer should highlight the benefits that fit their special needs.

Salespeople want to get really good about differentiating their products and services from their competition and they need to know the profile of their ideal customer. They need to know what their sales goals.

Steps to looking for the right customers

You never want to pick a market that your competencies can’t support. You can’t classify yourself as an expert in something you know nothing about.  Instead, look for a specific person or group of people that benefit from your offer the most. What is the profile of the client that provides the best revenue?  Knowing this will allow you to offer a product or service that is specific and work best for their needs. It makes selling so much easier and helps to alleviate competitions because you’ve already differentiated your niche market.

This is the perfect time to present your sales script when you know the specific group of people will move you to rapid growth. When your script is well-crafted, you have a higher rate of closing.

One of Mattew’s clients was a language institute called Beijing Language Academy. They were having a difficult time charging more than $50-80 for a one-on-one consultation. It was a massive problem for them.  Matthew was called in to help and helped them come up with their sales goals and customer avatar. When they looked at their existing clients, they found that they weren’t only giving language lessons but their academy was also teaching their customers how to become successful in China.

Hence, China Success Institute was born. It’s now an education course for executives, their spouses, and their children who are being relocated to China. They now charge $30,000 for the program and they don’t have any problem selling it. The key was thinking about their branding even before they came up with the sales script.

Focus on your branding

John McEntire is a podcaster and he sells an autoresponder for $1,200. Although he was doing okay and was able to sell his premiums, he had the wrong messaging. He was fighting against bigger competitors who assumed that people knew what an autoresponder is. With Matthew’s guidance, they changed their branding. They went to educating their customers on inquiry re-engagement and focused on going into real estate agencies using a sales script that would allow them to grow their platform. By creating a unified message that highlighted the benefits, they were able to change John’s niche market from online businesses to people who are established in brick and mortar businesses.

What should you do?

Matthew’s podcast is called Better Business Coach and his focus is to share how a salesperson can become successful using a sales script. He suggests salespeople write down three business goals and three personal goals. One of them should be to be absolutely selfish because this will serve as their driving force. He then tells them to use the smart criteria and directs them to summarize their goals into 250 words or less, including their “why statement” and why these goals are important to them.

The next step is to write down their avatar and mind dump every single person they’ve successfully worked with. After they have their list of customers, they write down everything they do for these customers.  The last piece is to find a higher purpose and make it the end goal. Matthew’s point in this exercise is for his clients to see if their goals conflict with the people they associate with and adjust accordingly.

As a salesperson, it can be scary to try new things but think positively and put your best foot forward. Having a script allows you to work smarter, not harder.

You can start with scripting sounding robotic but it’s the practice that makes you feel and sound more natural. #SalesScript

Find Mathew Pollard at matthewpollard.guru. He is also on LinkedIn, so you can check him out there as well.