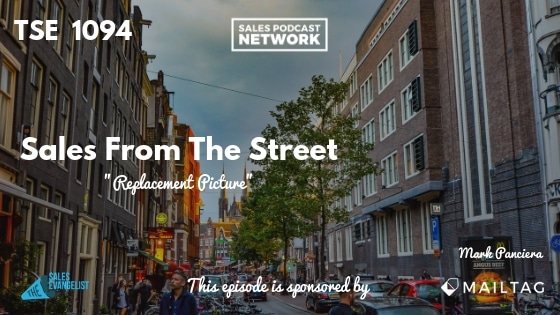 Sellers have built up tension and fears which prevent us from reaching our true potential, but if we create a replacement picture of what success will look like, we’ll move toward positive change.

Mark Panciera is a third-generation funeral director, so he says he has a caregiver’s heart, but he has grown into being a sales maven. He’s a partner of the Pacific Institute, a performance consulting firm with an international footprint, where he helps leaders tap into their potential to drive greater personal and professional performance.

All meaningful, lasting change starts within ourselves and then works its way out. That equates to mindset or habits, attitudes, beliefs, and expectations. It’s focusing on the beliefs that are propelling us to our greater good or our higher purpose.

It’s about the pictures that we hold in our mind.

Sometimes as sales reps we get focused only on closing the deal. Even before that, we may routinely tell ourselves garbage that keeps us from reaching our potential.

Think about what grows naturally in a garden: weeds. Likewise, we have a natural inclination. We’ve got this chatterbox in our minds that acts as a little committee telling us what we can and can’t accomplish.

Mark was full of trepidation when he moved from the caregiving role to transacting business with leaders around the globe. He realized that his self-talk was holding him back.

Mark couldn’t imagine that he could teach them anything that they didn’t already know.

He had to feel the fear and then move anyway. Mark needed to run toward the roar. It’s more easily said than done, but he realized that he had a choice to become more transactionally oriented or to stay where he was. He could either do it or not.

Adult choices have adult consequences. You will have consequences to your choice to make a solicitation or do an outreach or dial just one more time despite a bunch of “no” answers.

Mark knows that ultimately his higher purpose is served because he will be a caregiver to a larger audience when he transacts business.

He chooses to say yes to that purpose because beyond the fear or resistance or limiting beliefs or self-talk is the replacement picture that emerges when he serves his higher purpose.

We move toward and become like the things we think about. So replace the negative self-talk with positivity and focus on what it’s going to look like, smell like, or taste like when you succeed. #Success

When you’re helping people and giving them the tools to think and perform differently, create a “want to” mentality instead of a “have to” mentality. When people are forced to do something, they subconsciously push back on those efforts. It’s even true when you’re forcing yourself to do something.

So don’t push yourself. Create a “want to” mentality. Have some fun doing it. Most importantly, move toward that replacement picture of what success is going to look like.

He had to rebrand himself to do outreach because in funeral services people come to you. Performance consulting was a different story. He had to create a “want to” mentality for himself so he could create a different mindset. Mark had to recast his habits and attitudes toward selling.

He had to feel the fear of something he had never done before and run toward the roar.

Mark wrestled with imposter syndrome because he moved from caring for the dead to breathing life into leaders around the globe. He felt like a poser.

He worked feverishly once he painted the replacement picture to garner the knowledge necessary to built a skill set of competency in this realm. Mark surrounded himself with the right consultants, coaches, and leaders and poured himself into reading, listening, and going to conferences.

Because we think in pictures, he had to see himself in a new picture and then move toward it.

Make sure you’ve got your armor around you and don’t take it personally when you hear a “no.” Even if the people around you like family or friends don’t understand what you’re doing, be convicted based upon your own mindset.

You’re going to deal with cognitive dissonance which will cause you to feel like you’re out of order.

But just as your muscles will feel fatigued and tired when you exercise, you’re going to feel fatigued if you move to a higher level of performance.

Imagine going to a networking event. Some folks have resistance in their minds to interacting with strangers and possibly being rejected. We worry about forgetting people’s names or not being invited in. We might be a little clunky with our conversations.

If you think about the negative things, that’s where you’ll end up. It’s like a kid learning to ride a bike. If you tell them to watch out for cracks they’ll become so worried about the cracks they’ll end up there.

So now take that same concept to a networking event and realize that if you focus solely on the things you don’t want to happen, you’ll manifest them because the brain doesn’t know the difference between something vividly imagined and an actual experience.

Instead, replace those pictures with how you want things to actually go.

And in the end, even if none of that happens, you’re going to celebrate the fact that you actually acted. That success will give you the energy to move forward the next time at the very least.

As a person of faith, I often pray, “Help me to be led to someone today who can benefit from my product or service.” It puts me in the mindset to find someone who needs my help.

Whether you believe it’s mysticism or something else, you can drive synaptic firings of your brain and create new neural pathways. You can manifest a morphing of your brain.

People often ask how long it takes to change a habit, but Mark believes it has to do with quantity of repetition rather than quantity of time.

At the end of the day, you need to have that 50 done, but look at the proximal goal to make sure you’re accomplishing them, and then celebrate them once you do.

If you’re looking at 50, how many do you need to make per hour? Game your own system. Create habits around that.

Stop with the creative avoidance and get after the first 10 because those first 10 will motivate you and move you toward the next cup of coffee or the walk around the office.

You only steal second base by getting your foot off of first.

Make the first call and commit within your first 10 minutes in the office in order to build momentum. Then jog around the block and keep your energy up.

Admiral William McRaven gave a commencement speech at the University of Texas in which he encouraged students to make their beds first thing in the morning. If you do, you can never look back on your day and fear that you didn’t succeed at something.

Focus on your strongest picture and if you’re compelled to believe that what you’re selling can make people better then focus on that. Find your why or your north star.

Once you have that prize in mind, get after it.

You can connect with Mark at (844) 200-8649 or email him at mpanciera@thepacificinstitute.com or find him on LinkedIn.

Connect with me at donald@thesalesevangelist.com. 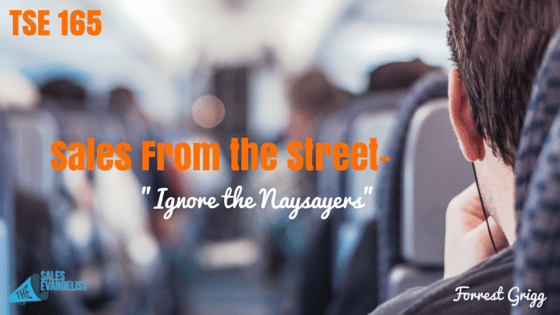 TSE 165: Sales From the Street-“Ignore the Naysayers”

If you let it, negative thinking will cripple all of your aspirations. It’s even more difficult if the negative thinking is coming from a superior, even your boss. During this week’s episode of “Sales From the Street,” I have the honor of interviewing a former college classmate who is now in the world of sales. Forrest Grigg is an International Business Development at AMET Inc..

During our discussion, Forrest shares how, like many, he came across some negative kickback from his boss as he was working on a sizable deal. This was his first business opportunity of this size and it was not a typical contract his company was used to closing.

Having spent a reasonable amount of time with the prospect, understanding his pain, building a strong relationship, learning that he had the budget for the project and the desire to get started; Forrest listened to his gut and the prospect and pushed forward with the deal. The rest is history. Take a moment to listen to his story. Also, feel free to connect with Forrest on LinkedIn or shoot him an email.

All in all, remember to be confident in what you know to be true and go out and do BIG THINGS!