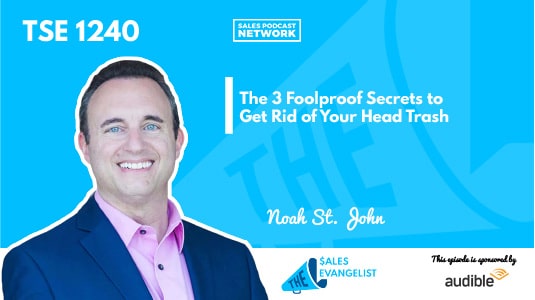 TSE 1240: The 3 Foolproof Secrets to Get Rid of Your Head Trash

What does it mean to have head trash and how exactly can you get rid of it? Let’s talk about 3 foolproof secrets to get rid of your head trash.

Noah St. John is known as The Power Habits Mentor because he has helped thousands of people master their inner game and outer game to help them make more and work less.

He works with sales professionals, entrepreneurs, celebrities, CEOs, athletes, and more. Noah helps them get rid of their head trash about money, relationships, and everything else holding them back. He is the author of 15 books and his most recently published book is entitled Power Habits: The New Science for Making Success Automatic. Through his work, Noah and his team have helped entrepreneurs and sales professionals increase their sales to six, seven, and even eight figures by using his methods.

Noah discovered the notion of head trash many years ago. Head trash is the negative voice in your head that constantly tells you, “I can’t because … “ It’s the voice that states all the reasons why you can’t do something you want to do. People consistently approach Noah and tell him they want to reach for more and do bigger things but they can’t because they’re too busy or they don’t have money for it. They have so many reasons why they can’t do the things they want to do. When you tell yourself something your mind is going to believe it. When you say you don’t have the time, then your inner self will believe you truly do not have the time. You are going to make that belief true even when it’s a lie. We all have 24 hours a day regardless of who you are. Time is irrelevant so it’s not an excuse that many people think they have. Head trash is damaging because it’s holding people back.

The first step on how to get rid of your head trash is identifying what it is. For most people it’s repetitive but people fail to realize that it’s the head trash telling you the same lies over and over again. Ideas such as, I’m stupid or I’m not good enough can go through your mind in a loop and you don’t even realize it.  Because these lies are repetitive and habitual, many people aren’t even considering the damage it can cause.

Identifying your head trash is fairly easy. Write down the negative beliefs you’re carrying about yourself. Most of the negative things we say to ourselves aren’t true. Writing down your negative thoughts will help you become aware of them.

Noah has a client who was a sales professional. She was making about $5,000 a month in sales but she knew she was capable of making more. This salesperson spent time and money to train with gurus but for several years was still stuck at $5,000 a month. She attended Noah’s event called Freedom Lifestyle Experience and hired Noah as a coach. Within a year of using Noah’s Power Habit System, her revenue jumped from $5,000/month to $75,000/month! This is proof that understanding your own head trash and being able to overcome the negative noise will lead to good results.

You need to look at your inner game in all the different aspects of your life.

The outer game includes the systems and strategies, the blocking and tackling. These would be all the sales tactics invested in and studied.  By working with salespeople for the last two decades, Noah found that success is attained only when someone has mastered both the inner and outer game.

Understand that you can change your beliefs

The first step to transformation is awareness. It’s only when you are aware of something that you’re able to change. If you want to change your life, you need to change your beliefs – these are your thoughts. The human brain automatically searches to answer the questions you ask it. Noah thought about that and realized can’t just make statements the way we do in affirmations.  We don’t believe it. Instead, we need to start asking ourselves questions to put the brain to work. Start asking empowering questions that will lead to phenomenal answers.

An affirmation is a statement of something you want to be true. One of the things Noah loves doing during keynote speeches is using the old-school affirmation method. He instructs people to stand up and say, “I am rich.”  Immediately after, the attendees start laughing. When Noah asks why, they say, “I’m not actually rich.” This is why affirmations don’t work. You have to believe in the statements for them to work. Noah, realizing affirmations were ineffective, created The Afformation Method. It is the most direct and powerful yet simple method you can use to change your beliefs. This method uses the act of asking questions that will lead you to look for the answers. Using the Afformation method, you can change the question to change your beliefs, habits, and eventually your life.

Getting the correct mindset

When to use the system

Order the book PowerHabits on Amazon or from the website, Powerhabits.com. Noah will send out a gift package worth $299. If you’re listening to this podcast, Noah will give our two tickets for his Freedom Lifestyle Experience event.