Category Archives for Meeting with Customers 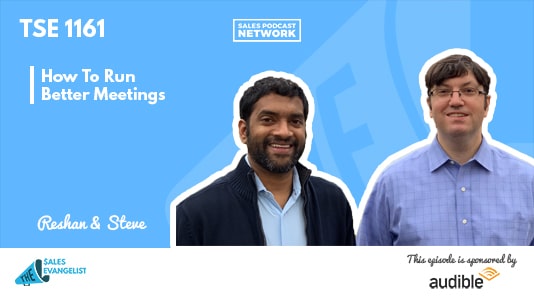 Meetings serve an important purpose in business so we must learn how to run better meetings to avoid the feeling that we are wasting our time.

Reshan Richards is a career educator who launched an app — targeted for use in schools — that ultimately became a software business. He has seen a significant intersection between things that are effective in both business practices and the classroom. Together with Steve Valentine, also a career educator, he is collaborating to articulate and pinpoint the specific moves that can be borrowed from the teaching profession and implemented in business. Steve has studied leadership and its application in order to work with young people and help them understand basic leadership.

The problems that plague corporate meetings often mirror those of ineffective classrooms. Primarily, the transmission of information isn’t right for the audience who is meant to understand it. People often go back to their defaults or their own experiences to measure what is right.

If, for example, you get called into a meeting where one person is doing all the talking or all the work, it isn’t a good use of anyone’s time. It wasn’t likely called for the service of the people who are meant to share the information. In education, a difference exists between the transmission of information and the building of knowledge.

Reshan and Steve believe that the best kinds of meetings are those that leave people feeling like they couldn’t possibly have had the same great experience without the meeting. In other words, there’s no substitute for the meeting, and people are glad they went.

Unfortunately, that’s a rare occurrence in both business and education.

If you think about the amount of time and effort it takes to secure a face-to-face meeting with a customer or client, it’s important to be respectful of that person’s time, energy and attention. Never leave him doubting why he was…
Click To Tweet

Reshan’s company, Explain Everything, worked with a Fortune 100 company to help them run better training for new-to-title employees. As he evaluated their structure, he realized that 90 percent of the time during a week-long seminar was spent sitting watching PowerPoint presentations. The other 10 percent of the time was application of what they learned. The following week, those employees were sent into the field.

The meetings were efficient and easy to plan, but retention was low, so he worked with them to rethink their time together. He encouraged the company to think about how it might best utilize the experts in the meetings as well as how the information should be delivered.

That information doesn’t have to appear as a revelation. Rather it can simply be the chance to build knowledge together in the temporal context they share.

Planning a great meeting looks exactly the same as planning a great lesson or learning experience. Reshan and Steve think in terms of three motions, or phases.

These stages parallel the stages of sales, where sellers engage in pre-call, during, and then follow-up.

As the meeting facilitator, you should have a really good awareness of the prior knowledge participants have prior to the meeting.

Often times meetings get scheduled by those who have the authority to do so, but the attendees don’t know the agenda until they arrive. Those that get the agenda ahead of time either get it too far in advance or too close to the meeting time.

Meeting prep also varies greatly among the attendees at meetings. Some people dutifully prepare for the meeting while others never even look at the agenda. The facilitator often has to go to the lowest common denominator because a percentage of people didn’t prepare. In the end, that holds the entire organization back because it means that instead of starting at level 7 in the dialog, you’re starting at zero because there is no ritual around basic procedures.

Ask yourself whether it’s necessary to actually have everyone in the same room at the same time in order to achieve your outcome.

If you’re interested in making sure that learning happens in your meetings, build in brain breaks where you provide time for people to synthesize the information you provide. Things often move quickly in meetings, and if you build simple pauses like questions or discussions into the meeting itself, you’ll support learning.

If you don’t give the human brain time to do what it does best, you’ll leave a lot on the table in the meeting.

Consider the intention of the meeting as you’re determining how much information you include. There’s no right or wrong number of agenda items, but you must provide off-ramps so that you can read the room and respond to the audience. Be willing to push some of the information into off-line discussions without disrupting the meeting momentum.

Just because it was delivered doesn’t mean it was understood.

Your organization might successfully navigate a meeting with 14 agenda items, but ask yourself what the impact of the meeting was. In schools, this shows up as racing through the content without making sure students understand. The art exists in adjusting your presentation and being able to reshuffle things if necessary.

Steve once had to plan a two-day retreat for a group of leaders, and his approach at that time was to build massive slide decks in an attempt to control every moment. Reshan suggested cutting the number of slides down a bit, and then he cut it from about 100 slides to seven.

Steve remembers being terrified because he wasn’t sure what he was going to do or say, but Reshan reminded him that their purpose was to facilitate. They intended to bring ideas out of the leaders so they would have a transformative experience. In short, the leaders were to do more of the work.

The pair structured the meeting loosely, but it wasn’t without structure. As a result, the participants accomplished much more than any of them expected. They still hear from the people who attended that event.

Steve notes, too, that they weren’t being lazy. They were actually being rather rigorous in their preparation because they were removing rather than adding. The result was productive chaos.

As a general rule, the content kind varies inversely to the time: the longer the engagement, the less content there should be. You’ll build in more generative time from participants.

Think about how you can design your meeting so that the people in the room are doing more of the work and the thinking. That’s what leads them to be able to use the knowledge.

Many people work without the need to go to the office every day. If you’re taking someone’s time, hold your meetings to a higher standard. Remember that they are never getting that time back.

Reshan and Steve launched a book called Make Yourself Clear, and you can connect with them at the website, MakeYourselfClear.xyz. 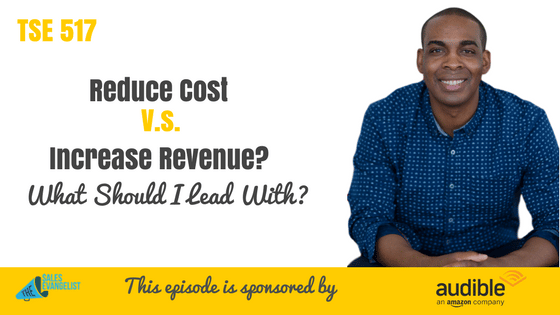 TSE 517: Reduce Cost or Increase Revenue? What Should I Lead With?

As a seller, your job is to bring value to your clients by finding ways that will either help them cut their expenses and save money or increase revenue. But which one should you lead them with?

What is the goal of every business?

For any business, one of the biggest goals is to increase revenue. Cutting cost is imperative but as a seller, this may not be the most effective thing for you to lead with every single time.

The problem with reducing cost every time

There is only so much cost you can reduce before it comes ineffective. You can’t get rid of everything or go out and fire your employees. Sometimes, cost go hand in hand with increasing revenue.

The thing to lead with: Find ways to increase revenue

Companies continuously seek ways to increase their revenue and if you could come in and speak of ways where you can strategically explain or give specific examples of ways that your product/service can help them increase revenue.

Create value through their unconsidered need, which are things that your prospects have not necessarily thought about and things that they don’t know that could be benefiting their organization but they haven’t taken advantage of.

There is no limit to increasing sales

Focus on increasing revenue because there is no ceiling with it and there is no set limit on the money you can bring in. Unlike reducing cost where there just comes a point where the could no longer go any lower.

Do your homework. It is important to know the best strategy or process to understand how a company makes money.

It is better to lead with ways that you can help your clients increase revenue than to just share with them ways to reduce expenses otherwise you come to a point where you simply outsell yourself since they can’t go any lower.
Episode Resources:

Get a free audio book download and a 30-day free trial at audibletrial.com/tse with over 180,000 titles to choose from for your iPhone, Android, Kindle or mp3 player. 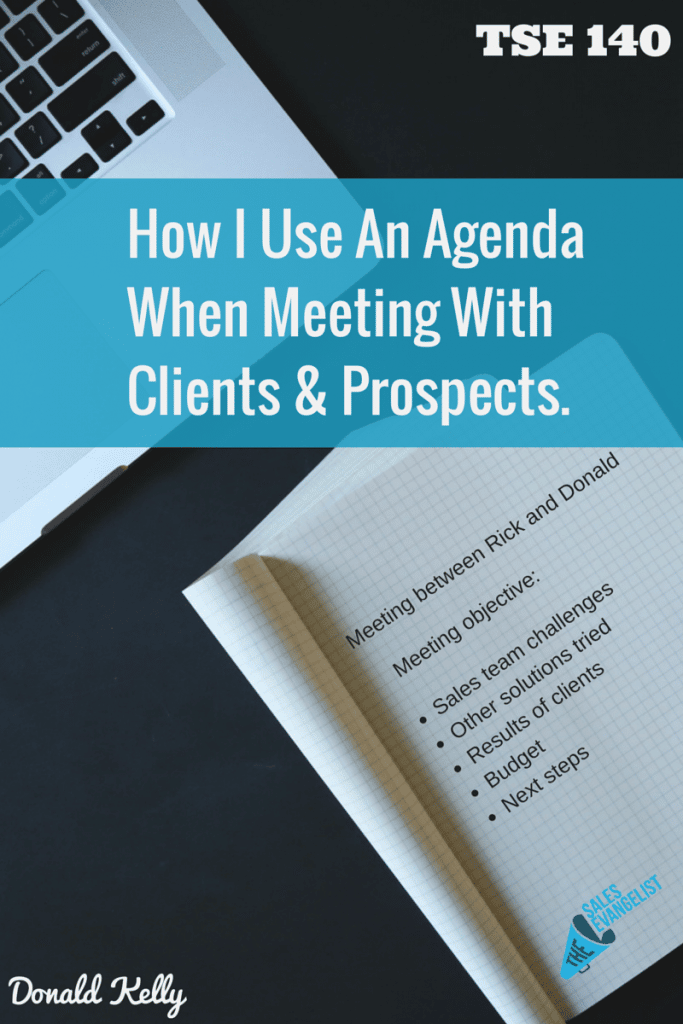 TSE 140: How I Use An Agenda When Meeting With Clients & Prospects

Today, let’s bring back the most important thing we all need to do in sales – the basics.

First on the list is having a sales meeting agenda.

You will be talking with decision-makers and for these people, time is gold (as much as yours is). So by having a clear agenda, not only will you be perceived as a professional, but also, you will have a guideline to keep the sales process on the right track and to make sure everything will be covered, thus no time to waste.

How to make a clear sales meeting agenda:

When you get to the meeting…

It’s all about making a solid relationship. Think more about what the customer needs and wants so you’re able to provide them with what they need. This keeps you on track just by doing the basics.