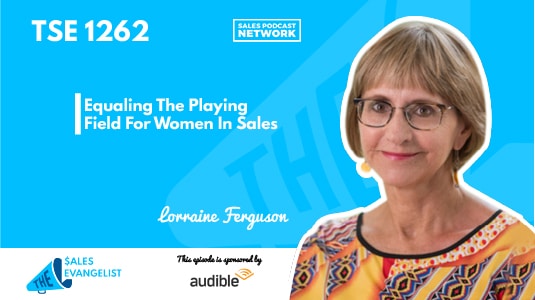 TSE 1262: Equaling The Playing Field For Women In Sales

Sales used to be a man’s world, used to. The same can’t be said now because women have found their place in the sales industry as well.

Lorraine Ferguson is one of the great saleswomen. She started her career in the industry in the mid-eighties by working for a startup company. Like many women, she didn’t see herself as a salesperson but her job for the startup company called for it and Lorraine ended up joining a team of salesmen.

Lorraine was young and inexperienced so she did what she could by imitating what she saw the salesmen were doing. With so much pressure sales, the job didn’t seem appealing. Sales were all about making the deal and sharing the benefits and features of the products and services. Lorraine did what she could but the biggest challenge wasn’t selling. It was her gender. Lorraine felt that she wasn’t taken seriously and several times during a negotiation, she was asked to bring in her boss.

It wasn’t just her lack of experience and knowledge that became a challenge. She was also conducting herself based on the way she was raised. She was taught that being a good girl meant being accommodating, knowing her place, and waiting for her turn. Lorraine didn’t immediately realize that she was carrying all these lessons as she became a salesperson. When somebody told her to jump, she’d say, “How high?” She just wasn’t being treated as an equal and she wasn’t acting like one.

People have developed a negative view of sales, women included. It’s not a career you immediately want to join or take a part in. This is the mindset that many people have toward sales. Women are also not told encouraged to join sales as a potential career, especially by your guidance counselor. People don’t typically see sales as an option.

Another reason why women don’t perceive sales as a possible career is the hiring process. Men are still the favored gender because the majority of the sales leader positions are occupied by men. Women aren’t seen as a fit for sales. A lot of people look at sales as a stepping stone or last resort. It’s the mindset that if you’ve got nothing else to do, then try sales.

This, of course, isn’t true. There is so much more to sales and it can be a very profitable career. As a profession, it’s very flexible, and women have many natural strengths that are needed by today’s sales professionals.

Convincing the saleswoman in you

Women can make a big difference in the sales industry for many reasons. They have the right skill set to become successful in this career. It’s not just knowing about the products and services, it’s also about having the natural ability to connect and understand another person. Consumers today are expecting salespeople to know about their businesses as much as they know the products and services they sell.

Women have the innate ability to connect the dots when trying to understand a  problem and how they might solve it. Women are great listeners and asking the right questions is always a good start in a sales conversation. When women talk to their best friend, they give their attention and they listen. They also ask tough questions to help their friends solve the problems themselves. This can also be used in sales. Women in sales are bringing a lot to the table because they tend to be more concerned about others than they are for themselves. It’s their nature to put others first. Women tend to like to help others and this is what sales is all about.

Other skills women have is their ability to organize and follow-through. A woman who wants flexibility, to make their mark, to be a problem solver, and to work on her own schedule is someone who would fit the sales industry perfectly.

In a male-dominated industry, women have to work harder to prove themselves to the person they are working for. This can be difficult to do but women’s organizational skills help. The truth is that when most salespeople think they have a sales process, the reality is that they either have one that doesn’t work or they don’t really have one, to begin with.

Women make sure to make a roadmap for their sales process. These questions guide and shape the sales system.

Women do things in the right order so they have a high predictability of success. A woman with a process will always win over the salesperson who has no real system. She knows how to start a conversation, gain control, and set expectations. A woman with a sales process understands what it is that she needs to uncover to qualify someone.

Women couple their natural skills with their sales process so there’s no pressure. It’s conversational and disarmingly honest.

Lorraine had an awakening in her sales career. It was during the time when men dominated the industry and one day, she got angry about being ignored. She decided to make a change and she had an unconditional commitment to making that change.

Lorraine would go to her sales calls with a voice in the back of her mind reminding her to be polite, to refrain from asking questions, and to let everybody else go first. She didn’t think of herself as an equal. She had to change that mindset by working on her personal presence. Lorraine looked at her reflection in the mirror and observed her body language and how she was coming across. She started to prepare more for her meetings to be able to take control of the conversation.

Lorraine found that if she practiced and prepared for her meetings, she got better outcomes. She’d meet her clients and with her agenda already planned, she’d take control of the situation right away. The little changes that Lorraine made in her sales process and her personal presence advanced her quickly. She took control from the very beginning of the conversation but then ensured her client that the conversation was collaborative. She wasn’t being aggressive, she was being assertive.

Having the ability to set an agenda made a huge difference for Lorraine and it eventually became an effective habit for her. She also started ending each meeting by sharing her next steps and she saw how her potential clients would sit up in their chairs in anticipation of that next step.

Sometimes we need to ask tough questions, do some nurturing, even do a deeper investigation to solve a client’s problem. #SalesProcess

Sales for women then and now

Unfortunately, not a lot has changed in sales in the way men perceive women in the industry nor has the way women respond to this perception.

There’s still some work to do on that front but Lorraine shared that the tide is going to change. This can be credited to how women are showing their male counterparts that they don’t need to sell like a man to be successful in what they do. There’s a level of respect when women are successful. As a woman, Lorraine takes some risks. When she’s uncomfortable, she’s upfront about it. The worst-case scenario when women take risks is that they don’t get to do business with a potential client. Still, the best-case scenario is that they’ll close a deal. Take a chance. Ask the hard-hitting questions and be okay with feeling comfortable.  To make it easier, you can ask, “Can I ask a tough question?”  Buyers are desperate to talk with someone who is willing to really listen and understand what is going on.

The sales industry is still a challenge for women as they get put in uncomfortable circumstances and feel disrespected but they can also stand in their strengths.

“Equaling The Playing Field For Women In Sales” episode resources

Sales is a good fit for both men and women but there are three things that we need to work on:

Women in sales can level the playing field and be competent in the sales industry if they keep those three things in mind.  Reach Lorraine Ferguson via her email or visit her LinkedIn account. If you are interested in more sales stories, you can talk to Donald about it. Reach him via these channels: LinkedIn, Instagram, Twitter, and Facebook about any sales concerns. This episode is brought to you in part by TSE Certified Sales Training Program. It’s a course designed to help new and struggling sellers to master the fundamentals of sales and close more deals.

Sign up now and get the first two modules for free! You can also call us at (561) 570-5077. We have a new semester beginning this March and we would love to have you and your team join us. Follow this link to apply to the program. We’d love for you to join us for our next episodes so tune in on Apple Podcast, Google Podcast, Stitcher, and Spotify. You can also leave comments, suggestions, and ratings to every episode you listen to.

You can also read more about sales or listen to audiobooks on Audible and explore this huge online library. Register now to get a free book and a 30-day free trial. Audio provided by Free SFX and Bensound. Other songs used in the episodes are as follows: The Organ Grinder written by Bradley Jay Hill, performed by Bright Seed, and Produced by Brightseed and Hill.