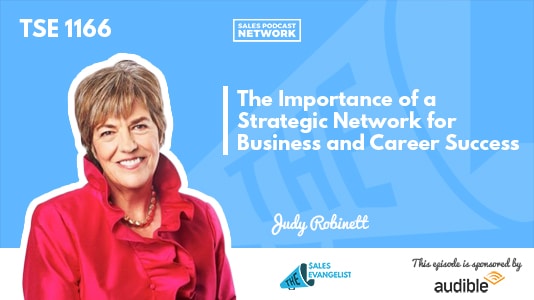 TSE 1166: The Importance of a Strategic Network for Business and Career Success

Many sellers overlook fundamental selling principles, but salespeople must learn the importance of a strategic network for business and career success in order to become proficient in our jobs.

Judy Robinett is an advisor to Springboard, an incubator that helps women founders, with great statistics of 19 IPOs and 165 strategic sells. Judy loves educating people and meeting entrepreneurs and helping them with connections.

Judy worked as a social worker but she didn’t stop there. She explored her options and opportunities after making some bad decisions like starting her own franchise restaurant. In time, her business failed and she had to sell it.

She worked with a then-unknown company called Skullcandy® when they were broke and had a quarter of a million dollars in revenue. She helped the company build its credibility and bring its revenue up again. That fueled her interest in startups and she became an investor herself. Fast forward to now, she’s a managing director at Golden Seeds.

The book Crack the Funding Code is an easy-to-follow roadmap on how to find and pitch investors. The book’s appendix has term sheets, actual pitch decks, and other relevant research information. It is a book that will educate entrepreneurs because these people can change the world.

Entrepreneurs take calculated risks. Along the way, missteps create lessons waiting to be learned. Judy’s bankruptcy lawyer said of her failed franchise restaurant, “They can break you but they can’t eat you.”

Judy learned to kick fear to the curb and understand that there’s no lack of resources in the world because resources are connected to human beings. It is true that sales are critical in finding and catching investors. It’s also important in catching the customers. Entrepreneurs must learn to navigate in their mistakes.

Howard Stevenson, known as the Lion of Entrepreneurism at Harvard, wrote a book on how to be an angel investor. His book talked about how you can set yourself apart from everybody else. In order to be perceived as a high-potential startup:

It is good for startups to put high-powered people in their advisory board to help build their credibility, especially if the CEO hasn’t done a startup before. In the VC investing world, people talk about adult supervision. This is critical because you want to have reliable people in your team with deep industry expertise who can open doors to money, media, and other resources that you might need.

Getting investors is more than just being good and being able to produce something.

One of the most common mistakes entrepreneurs do in their pitches is the way they focus on technology and explain the details at length. Investors, however, care less about that. Harvard researchers found that the average amount of time people spend looking at a particular slide is 11 seconds. Financial slides, however, get 23 seconds worth of attention.

Investors look for a team that can execute to a big enough market, the total addressable market (TAM).

Arthur Rock was the first venture capitalist who started the industry in Silicon Valley. He said that if somebody comes to him with a B product but with an A team or an A product but with a B team, he’d always go for the A-team. This means that investors invest in the team that can execute.

So, the first C is you need to be coachable. We all have that blindspot of not knowing what we don’t know. It’s important to come across as coachable rather than arrogant. If somebody asks you about something that you don’t know, then be upfront and tell that person that you’ll get back to him. Then ask for help to show that you are coachable.

The third one is character. Howard Stevenson said in his book that when he hears an exaggeration or half-truth, he runs away instead of walking so that he won’t lose money. Investors have a way of looking at your character in a substantial way.

The moment we say that we don’t need more information is the moment that we stop growing. When we stop learning and stop being coached, we also stop progressing and growing.

A sales rep who has been selling for 10 years and who stops reading books about sales is stuck in the same way that an entrepreneur who stops needing advice is stuck.

Businesses fall short because entrepreneurs stop growing and because they don’t have a board of advisers to tell them the truth or advise them what to do.

CB Insights did a post mortem of 101 startups and one of the problems they found was the inability to learn and pivot. Clayton Christiansen, an expert on innovation at Harvard, said that 75% of startups pivot. Viagra didn’t start out being used the way it’s used today, but the nurses noticed a side-effect.

Everybody must be in an exploration of finding out what you don’t know because that’s where growth happens.

The obstacle is a gift. Run to your obstacle much like David running toward Goliath. Understand that every time you have a vision, Goliath shows up so you must master how to learn and pivot.

There are two words that mean fear: the first refers to being terrified, and the second is the sense of awe and wonder. This happens when you step out of your comfort zone.

You need to reframe your fear and deal with it.

Network your way to the right investors

It is critical to be in the right room. Judy met a founder who was trying to get investors in Salt Lake City for her company but she was in the wrong room because she wasn’t Mormon and she was a woman. Judy took her to Boston and San Francisco where she closed deals and then sold her company for millions

There are specific groups of investors. First, you start with your family, then your friends, then your credit cards, and you move up to the angel investor, the seed round. There are 400 angel groups in the U.S. and $317 trillion in private global wealth. There is no lack of money here. There’s also the governmental fund, the sovereign wealth fund. It is important that you know which group to go to.

You can find them via searching in Google, by going to pitch events, or by asking top lawyers and bankers who work with startups.

Do not forget to ask them the two golden questions:

On average, people know between 600 and 1,000 people. You don’t have to know tons of people; you need the right people to get in the right room.

Another good way to build your network is to find your way to private curated events and talk to people.  Let them know what you do. You can also ask them their opinion and who they know that you ought to be talking to as well. You’d be surprised at the number of people who are happy to help but you need to learn to ask.

This is particularly difficult if you are from the lower to middle class where you’re taught to keep your head down, get a degree, work hard, and don’t ask for help because people would notice. In truth, people do not notice.

According to research in Denmark, 5% of people in any corporation or organization are the true influencers and power brokers. Those are the people that you need to get to know.

You need a concise, compelling narrative. Dick Wilson, a VC who has had $1billion exit every year for the past five years, was asked how to create a compelling pitch. He said that it’s important to be concise, be compelling, and have passion.

You want to get to the second date so don’t spill all the details or all the financials because your job is to get those people to be interested in you and start doing due diligence. John Livesay, also known as Pitch Deck Guru, is a great man who can help you out with your compelling stories.

Research often suggests that the majority of startups fail but that data is inaccurate. Hard research shows that about 50 percent fail because the owners aren’t willing to learn.

Phil Graham, one of the Y Combinator founders, said that there are two reasons why startups fail:

One of the Dropbox founders said that before he started Dropbox, he didn’t know anything about sales engineering and product development. He bought the top three books in each of those areas, and he got an advisory board. Simply put, you don’t have to be brilliant and smarter than everybody else.

Don’t fail your startup. Use the two golden questions and start reaching out to strangers. Open your mouth and ask. Investors are everywhere and they need startups, too. They need to put their money into entrepreneurs’ startups so a little leg work and some networking is helpful. Go to the National Venture Capital Association and the National Angel Association to find lists of everybody.

Do your homework and do your due diligence on the investors.

Stay in touch with Judy via email, judy@judyrobinett.com, and her LinkedIn account. You can find the documents she mentioned in the episode here and here.

This episode is brought to you in part by TSE Certified Training Sales Program. A course to guide sales reps and sales leaders to become better in doing their pitches and presentations. It has 12 courses to help you find the right customers, ask the right questions, and close great deals. You can get the first two modules for free!

Or you can also check out Audible as well and explore this huge online library with thousands of books. Register now to get a free book and a 30-day free trial.

Thank you for tuning in and if you liked this episode, do give a rating and review on Apple Podcast, Google Podcast, Stitcher, and Spotify.