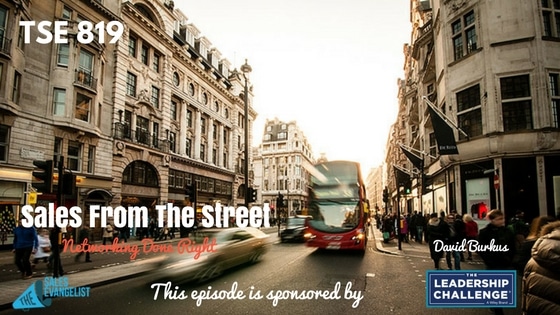 Most of the networking advice we hear is doomed to fail because it’s a story of one person in one situation. When we try to put their ideas into practice, it feels inauthentic.

Instead of copying someone else, we need to redefine what it means to network on our way to discovering what “networking done right” looks like. On today’s episode of The Sales Evangelist, David Burkus helps us change our mindset about what networking is so we can better take advantage of our existing networks.

We spend so much time trying to figure out how to connect with a stranger in a span of 7 seconds that we neglect the network we’re already in.

The biggest mindset shift is this: you don’t have a network, you exist inside a network.

If we redefine our thinking about networks, we can invest our time in learning how to navigate the network we’re already in instead of trying to figure out how to bring strangers into it.

David defines a network as a three-dimensional entity that you’re the center of. It includes your close connections as well as your weak or dormant connections.

Your goal should be to pay attention to the fringes of your network: those people who are one introduction away from being closer to the center of your network.

He calls it transitivity, and it’s an awareness that A knows B, and B knows C, so perhaps A and C can be connected.

There is ample research to suggest that unstructured networking events such as Chamber of Commerce and other gatherings aren’t beneficial.

Realistically, most of us might try to make a few connections, but we spend the bulk of our time with people we already know who are similar to us. Instead, we should look at the totality of the network we’re already in.

Most people should begin by identifying their weak and dormant ties. Weak ties are those that you don’t know well. Dormant ties are people you know who were once stronger connections but who fell by the wayside. None of them are strong connections.

Begin by asking them who they know in the sector that is relevant to you. It’s less assertive than asking them who might be interested in your product, and you’ll get a larger list because it’s less specific.

If you ask a variety of people and the same few names keep cropping up, those are your referrals. There’s a strong likelihood you’ll click.

Begin with an accurate map of your entire network, and include everyone.

We tend to put people in buckets based upon our connection to them: those we work with and those we know socially for starters. Realistically, though, many of our connections have more than one tie.

If, for example, you work with a person, that’s a uniplex tie. If you work together, have kids in the same school, and work out at the same gym, that’s multiplicity. You have multiple connections.

As you’re identifying your connections, then, don’t ignore someone just because your only shared interest is college football. As you’re building a map of your entire network, you never know who is in his network.

People tend to gather in clusters around similarities like industry, work history, or ideology.

Historically, the greatest value in our network exists when we can connect two of those clusters.

If you can reach out to another cluster and bridge the gap between two groups, you can create value.

Make it a habit to reach out to your weak and dormant ties. Pay attention to people you aren’t as close to.

Don’t trust your networking to fate. Most of us already have a route to meet everyone we want to meet within our existing networks.

Check out David’s book, Friend of a Friend: Understanding the Hidden Networks That Can Transform Your Life and Your Career.

Learn more about growing your network, becoming a better leader, and developing creativity at his website, www.davidburkus.com.

Check out the Video Jungle Podcast to hear best practices for video and film production and to learn the art of selling your product with video. The podcast is part of our newly-launched Sales Podcast Network, designed to provide specialized sales content for sellers of all levels and all industries.

Email us at SPN for more information.

Pick up your copy of Stop Selling & Start Leading: How to Make Extraordinary Sales Happen from our sponsors at Wiley.

Check out a free excerpt of the book, Stop Selling & Start Leading: How to Make Extraordinary Sales Happen, and discover why some of the things you’ve been taught to do in sales may be the very things your prospect hates.