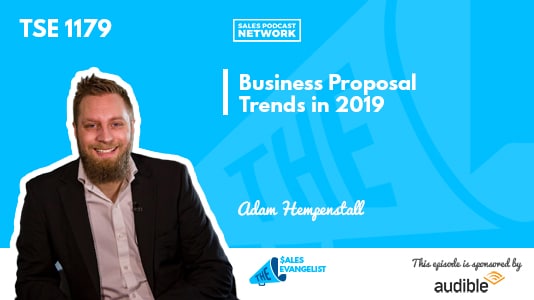 What are some of the business proposal trends in 2019 that you’ve used and that have worked for your industry? Trends change so often that we have to keep track of all the changes to be in the loop because what’s new today may be old news tomorrow.

Adam Hempenstall has been in the web design business for almost 20 years. He started doing basic websites and brochure sites before the company transitioned into a custom software company. They started building CRMs for different companies and have now invested full time into improving their proposal tool known as Better Proposals.

The most important thing is that you’re not just seeing a transition from the old school PDF method but the clients’ reluctance to change. There is, however, a massive shift towards people opening proposals using their phones.

Proposals need to be web-based these days. It has to do with what everything else is doing. They’re not just documents anymore, they’re experiences. Clients should be able to read the proposals by the time that you’ve sent them.

Aside from that, proposals should be sent quickly. Based on the observed data, there’s a higher rate of conversion for proposals that are sent within 24 hours compared to proposals sent in 3-4 days. The other important thing is trying to understand your client most.

From the data and stats Adam’s company is running, they’ve observed the following business proposal trends in 2019 that work:

People favor convenience over quality. This is apparent in the number of people watching videos on YouTube instead of going to the shows. Live shows mean better quality but people would opt to watch it on YouTube because it means that they can watch it immediately.

People want things the way they want them. For example, you’ve sent a proposal and the client is reading it in his train ride because that’s the time that he allocated for it. The client is not going to sit there and zoom in through the 15-page PDF proposal you’ve sent. That is not convenient for him. He’s probably going to skim, get bored, and close it down. He’ll make the decision over the price and all that effort of making the proposal is going down the drain because you’ve sent it in a format that isn’t convenient for him.

To beat your competitors, you want to stand out when you’re sending proposals. You don’t want to send the same ones that others are sending. This is especially true if you’re selling software, marketing, or anything with digital elements. You want to show your prospects that you are at the forefront of technology.

If you tell your prospective clients that you can make their website better and more responsive, you won’t send them a proposal in PDF form. Instead, you send them a web-based proposal and put a tracker in it.

This will allow you to see the activities that your prospective client is doing. You’d see that your client has opened the proposal and that he’d spent a good amount of time reading it.

You can give him a call half an hour later to just check in on how it was. You’re in a good place to speak about it because it’s still fresh on his mind.

You can’t do that with PDFs but you can do it if you use web-based proposals.

Adam and his team made a high-end proposal for a furniture company. The proposal was great but they didn’t have another meeting with them. After six months, the company randomly opened the proposal and Adam got a notification that they checked the proposal. Adam shoots them a quick message just asking how things are going and if they were able to find a solution to the problem that they were trying to solve last year. The company replied saying that they weren’t able to appreciate the value of the proposal then but are now willing to talk about it.

It’s equally important to repeatedly follow up after a proposal, but not up to the point that you’re putting it on them.

Just being there and being consistent is enough.

We’ve all had a time where we’ve completed a proposal quickly and had a good overturn deal. There have also been times that we’ve procrastinated and done other stuff instead of doing the proposal and when you’ve finally done it, your client has already gone with the other guy.

Adam’s company looked at the actual data of real proposals that people send through their software platform a few years back. Using the raw numbers, they tried to figure out different factors that affect proposal conversion. You can see the study on betterproposal.io/reports in both 2018 and 2019. They found out that sending the proposal within 24 hours after the initial meeting converts 25% more than if you send it in 2-3 days.

In Adam’s company, they meet their clients on a neutral ground. They have their meetings in top-end hotel lobbies because it’s comfortable and you can talk to the prospective client freely. When he leaves, you get to stay, order yourself another drink and write the proposal right then and there. It gets difficult when you give it a few more days because by then you remember very little of the meeting.

All those little things that you forget from the meeting were important to the client and if you wait more days before you write the proposal will lose you the deal eventually.

These include the following:

All those things that you remember within a couple of hours will be forgotten within a day.

Write your proposal immediately after your sales meeting to increase the chances you’ll win the deal. #SalesProposal

Care for your clients

This part doesn’t have anything to do with the proposals. It is more of what happens before the proposal, and it’s doing good discovery.

You can’t write a good business proposal for a person or a company if you don’t do good discovery. You can have the experience but that will only help you so far. You need to ask questions and you need to dig in and get them to reveal as much as they can.

You need to understand what they are trying to achieve.

Scratch beneath their surface-level problems to figure out their fears and help them find the solutions. You’re changing the proposal into a personal level and by then, it’s not only the surface-level solutions of the problems you’re proposing.

You are sending them a proposal that truly addresses their deeper concerns.

So, ask the right questions and don’t be afraid to get a little bit uncomfortable.

Trying out the three suggestions mentioned above will make your proposals better. Instead of sending PDFs, send a web-based proposal and save yourself lots of time. It’s also convenient and it’s a conversion booster. Aside from that, web-based proposals are cheap.

Sign up to Better Proposals website and see hundreds of templates. They also have contracts and other things you can check.

This episode is brought to you in-part by TSE Certified Sales Training Program. It’s a helpful guide for sales reps and sales leaders to improve their pitches and presentations. It has 12 courses and you can get the first two modules for free!

If you’re a reader who loves reading and listening to books, you can also check out Audible as well and explore this huge online library with thousands of books. Register now to get a free book and a 30-day free trial.

If you like this episode, don’t be shy and give us a thumbs up and rating on Apple Podcast, Google Podcast, Stitcher, and Spotify.